What Makes A Story A Story: “And then a bottle of kombucha fell from the sky” 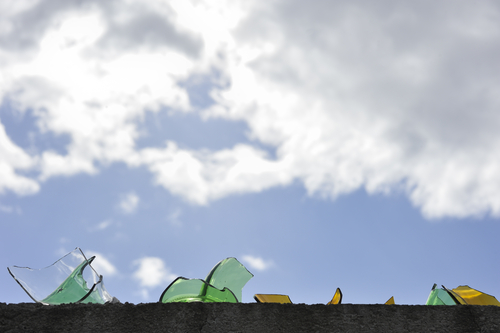 Yesterday I was sitting in a coffee shop that had the entire front wall open onto the sidewalk. My table was near the open wall, so I was practically on the sidewalk. It was rainy outside, but I was dry inside.

A guy walked by minding his own business and suddenly a glass bottle of kombucha fell from the sky (Yes, kombucha. This is Boulder). It missed his head but skimmed his back, crashed to the sidewalk and broke. He turned to see where it came from. Checked his bag. Looked up. Looked around. Looked at the ground. Stood there in dismay.

Another guy walked up and checked it out. Looked up. Looked around. A woman who saw it stopped. A guy getting out of his car came over to say what he saw. I got up from my table to try to see where it fell from. A conversation started. We shared some curiosity and wonder. Nobody could figure out where the bottle came from.

That’s how a story starts: Everything is normal. It’s raining. You’re walking down the street or sitting in a coffee shop minding your own business, inhabiting the regularness of daily life, when suddenly a bottle of kombucha falls out of the sky and hits you on the head.

The “Something Happens” is what’s key. Before the bottle fell, no story. Once the bottle falls, there’s the story.

I have been immersed in this world of speaking for a few years now, and the more talks I hear, the more I am surprised by the fact that, although lots of people know STORIES ARE THE KEY TO MAKING THE CONNECTION YOU WANT TO MAKE, many people really just don’t know how to tell a story.

In fact, lots of folks don’t even really understand what a story is.

So next time you want to connect with your audience and tell a story, ask yourself what happened? What was the turning point moment? What was the moment after which everything was different? Where were you in SPACE and TIME when that moment happened.

Get clear about that and build the story out from there.

Tell it to someone, then tell us about it in the comments below.

« Truth or Dare: 4 ways to crack that debilitating fear | How to Capture the Hearts of Your Audience: Yes, this really happened »

Ready to discover how to tell stories that convert to clients and have bigger impact?

I'd love to help.